Finding a pathway for growth – South Africa for Africa

The South African automotive industry is in a slow recovery phase with tough economic conditions expected in the local market as well as in its primary export markets (EU and UK).  The pathway for growth that has the potential to bear the most fruit in the next decade is a strategy focused on developing a dormant but high potential African regional market.

The African market for new vehicle sales is forecasted to grow at 4% annually. This is four times more than the growth rate for the global industry. The most significant markets forming in the current most advanced African economies of Egypt. Nigeria and Morocco.

The rapid industrialisation of Africa and subsequent expansion of an automotive market as long been touted to encourage foreign investment in South Africa. It is under this expectation that some OEMs set up shop in South Africa. This demand has not materialised.

The more realistic growth forecast of 4% annually still needs to be viewed in the right context. The types of vehicles that will dominate this emerging market is not going to be high-tech vehicles and very likely not electric vehicles.

OEMs focussing on basic entry level vehicles and simple, robust all terrain vehicles will be well positioned to respond to this demand.

A significant hindrance to stimulating demand for new vehicles in Africa is the import of second hand vehicles. Approximately 85% of the vehicles in Africa are second hand vehicles. Steps have been taken to limit the import of cheap undesirable second hand cars . Four countries have banned these imports, 10 countries have banned imports of cars older than 5 years and other less strict policies are in place. Sufficient evidence that these policies lead to increased new vehicle sales is hard to come by.

If a workable solution can be found to restrict the import of second hand vehicles and then convert that demand to low-cost new vehicles, significant growth can be unlocked for the South African automotive industry. 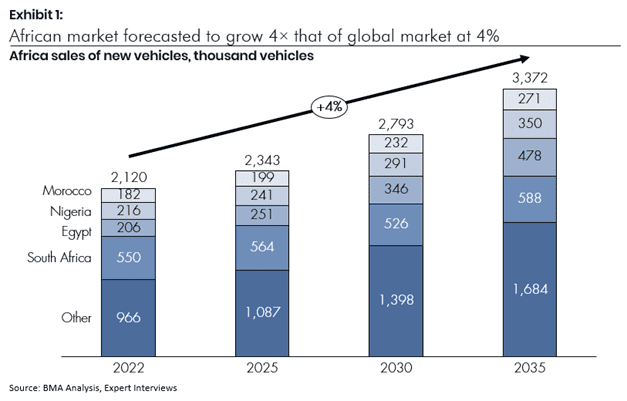 The Rise of Umbondo Trading